Singrauli lies in the north eastern corner of Madhya Pradesh on the edge of the Ganga Plain. It is an amalgamation of natural, cultural and archeological heritage. Singrauli belongs to the Bagelkhand region and is one of the important districts in Madhya Pradesh. While Singrauli City is spread over an area of 2,200 sq km, the district itself is spread over an area of 5672 sq.km. The location coordinates of Singrauli is 24.202°North latitude and 82.666°East longitude. Singrauli is located approximately at a distance 742Km from Bhopal and 200 km from circle head office, Rewa. 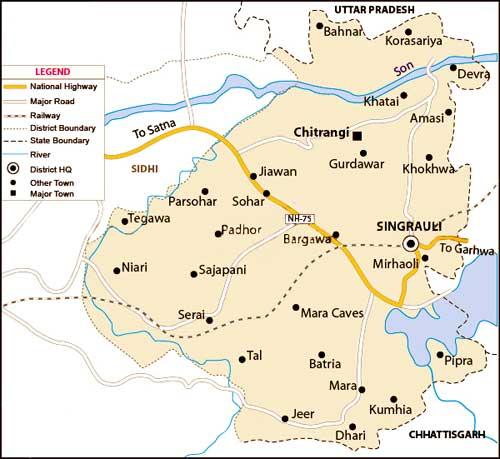 Singrauli is also known as the north eastern frontier of the state of Madhya Pradesh. It consists of two distinct morphological units, plateau region comprising of the mining region of the north and the plain below the plateau formed by the valleys of the Rihand river and its tributaries. The topography is undulating and the highest elevation is about 609 m above sea level at Chitrangi.

Singrauli lies in the warm tropical monsoonal belt of India and experiences hot summers and chilly winters. The mean maximum temperature ranges between 21.60 C in January and 45.30 C in May and a mean minimum temperature of 5.40 C in January and 31.90 C in June. The average rainfall recorded in the region is about 1100mm most of which is received during July to September.

Singrauli is a resource rich region with an abundance of mineral wealth. The land in the region comprises mainly of the archaens which are overlaind in places by the relatively younger Vindhyas and Gondwana. Parts of the Gondwana region bear rich coal seams, making this district a major coal mining center in the country. Copper, Sand, Stone, Gitti, Murum etc are the important minerals extracted in Singrauli apart from coal. Occurrence of concentrated granite veins has also been found recently.

Singrauli was initially a densely forested area before the coming of the mining industry. It had one of the most luxurious forest covers in the country of the dry deciduous variety. Forests have now given way for development but even today about 11841 hectares of the land in the region is under forest cover. The forests are a source of trees like Sagaun, Mahua, Chironji, Tendu etc which provides a source of livelihood to the local tribes which inhabit the region.

Singrauli is bestowed with numerous rivers which traverse the region, the most important of which is river Rihand. Rihand or Rhed as it is known locally, rises from the Matiranga hills and flows north into Uttar Pradesh via Singrauli and finally joins the Son. The Rihand dam constructed in 1962 was one of independent India’s architectural achievements for hydro power generation. The other rivers in the region are Kanchan, Chalki, Kanjas, Silhor, Bijul, Juri etc. 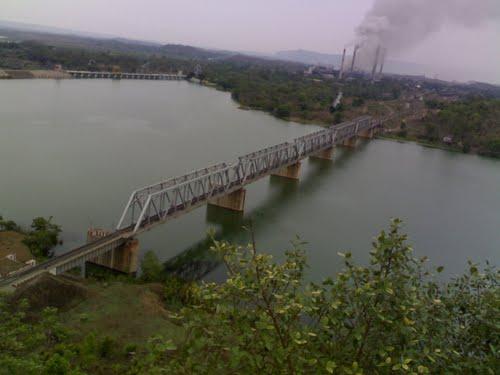 Singrauli at a Glance